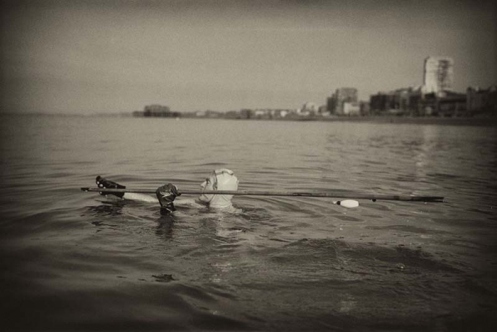 His grandfather founded the Brighton Swimming Club 150 years ago and David Sawyer now aged 70 still swims every day during the summer months and as much as he can during the winter. He suffers from arthritis and has to use ‘fins’, but can still swim from the Brighton Marina to the Brighton Pier and back, a distance of three or four miles. He sometimes fishes as he swims, carrying a bamboo cane with a line and tackle and tucking his catch – usually mackerel – into a bag around his neck. He says: “By braving the waves and exerting mind over matter, you are demonstrating your qualities as a person.”

I had known David for some time. Often bumping into each other outside the Brighton Swimming Club whilst I walked in circles producing my Brighton Beach Lovers series. I had taken a few portraits but was never really satisfied as I never felt I showed the real David and his amazing personality and single minded devotion to swimming. I borrowed a friends Kayak and headed out to near the end of the Pier and shot 6 rolls of  Kodak Tri X in a 6x9cm fim back on a Polaroid 600SE Rangefinder Camera. The following image is a scan from one of the straight portraits I shot a previous day. 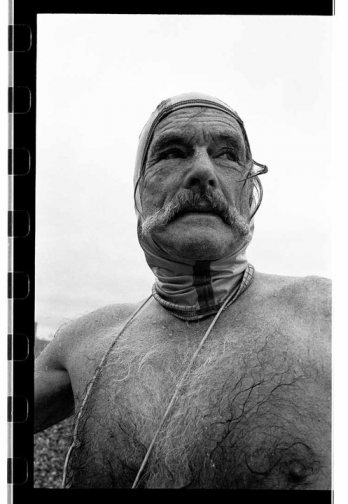